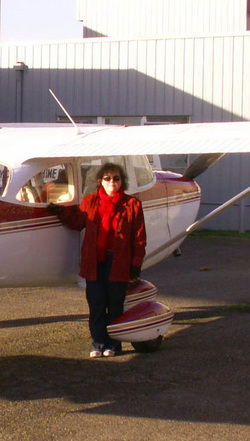 I began teaching math sometime in the early 1980's in Brooklyn, NY - it was a tough school, I was not prepared well, but I persevered. And I went back to school to learn more about being a better math teacher.

Next I taught math and art in a private school in Manhattan. My son also went to school there for awhile.

After moving back home to the Seattle Area I worked in Seattle at Meany Middle School teaching math and health for a year.

I've been here ever since teaching math and art. I must like it because I'm still here! My son went to school here and now he's at the U.

I went to high school at Lakeside in Seattle and then studied art and lots of other stuff at Yale. I graduated in 1978. I got an MFA in painting in 1980 at Indiana University. I studied math education at Teachers' College - part of Columbia University and got my certification there. I also got credits towards a mater's degree in math education.  I You can probably tell I really like school - although before I became a teacher I worked in Bloomingdales first selling then as a manager.

I spend a lot of my free time making art: either painting or making ceramics. This summer I worked on a series of porcelain bowls -  got very interested in what happens when you bend a two dimensional plane into a three dimensional curve - and then that turned into elaborate 'Basins' that reflect my thoughts on the river. Last year my paintings were on display at Snoqualmie City Hall for about four months. My art web site ishere. I guess I should update it, eh?

I've recently taken up bike riding - which is not to say I'm quick - but hey, I'm out there - showing up is half the battle! So if you see me be nice :)  I also fly-fish, take Nia & Zumba classes, have learned to fly a plane and was at one time New York State Women's International Skeet Champion.

But I guess mostly when it comes right down to it - I really love teaching. Because I get to play with ideas and I'm always learning from you.